If you were going to become a doctor, plumber, a dentist, builder, banker, journalist, fashion designer…ANYTHING you would go do some serious training. So why do people think that ACTING is any different? Its insulting.

Acting is just like anything else. Do your training. Go out and work and implement what you were taught and in 5 yrs or so you start to get good. After 20 years total, you become an expert. Simple.

This brings me to the topic of this post, but not because it done by amateurs. 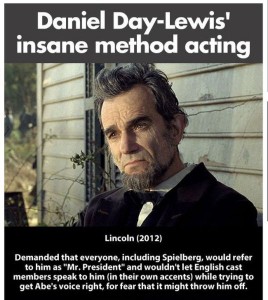 What the hell is it? Well most people think it is living the role. Why? Because that is the most easily digestible technique for the average person to get their head around. So what does this mean? Well it means, perhaps, jumping into character and staying there for the remainder of the shoot. Daniel Day Lewis is well known for this. In the Name of the Father (1993) he played a prisoner so he wanted some of the crew to come by periodically and through cold water onto him as he sat half naked in a cell. And this is when they were not shooting. In Lincoln (2012) he only wanted to live in this character, in this time period of history, for real for the whole shoot. That meant only being referred to by everyone (including the director) as “Mr President”. After the film had wrappe, he presumably dropped character and slowly returned to normal life.

I don’t advocate doing this. WHY? Because I am an actor and I have tried it. I did just a little film, a short film, shooting on location for 7 days straight. The cast and crew all sleeping in the house that we were shooting in. So I decided to try this. On the first night I didn’t sleep at all because in the morning I had to play a scene where my character had been going crazy and was possibly sleep deprived. So I did it and the scene went well but I starting getting all these side effects from doing that. The main one being that when I got back home I couldn’t sleep. I had Insomnia.

Heath Ledger. A wonderful actor from Australia peaked beyond belief with the Joker in The Dark Knight (2008). He died from, supposedly, a accidental overdose of presciption drugs. Sleepiing pills, anit-anxiety medication and pain killers. When filming The Joker it was reported that he could be found sitting in the corner talking to himself and that there was fears for his stability. Again he was known for living the role and in this film he clearly went all out. It is my opinion that Heath Ledger went too far with method acting and had slipped over the edge. Got back to his life in Manhatten and his mental problems gradually escalated until he was taking 3 different pills to combat all the problems with his health. And so he unintentionally took a fatal cocktail of drugs. So sad. I was a big fan.

him. He did not very eat much and ran all day long. Got thin, very thin. So when he was on screen he definitely looked the part. But at what cost? He said himself that after that role his metabolism was “stuffed” for life. Its not worth it. Too many actors in Hollywood goto extremes externally when the better place to push themselves is internally – with their imagination – not their real existence. Too much reality is not acting. Too much reality is admirable for the commitment, but there has to be some acting, some pretending. Otherwise I think there is no craft. Young actors do anything for fame and fortune in Hollywood and this is understandable because the stakes are huge and its all about standing out so you can then be branded as a star and then you are set for life. But live the role too much and you may not have a life.

Paul Walker from the The Fast & Furious (2001) got so into his role that he and his mate crashed a Porsche into a tree and died. A latter day James Dean. He leaves behind a daughter. At age 40 when you are a dad, you have no business putting your life into any questionable situation. Well…Now Paul Walker was reportedly always into fast cars, but no doubt after seven F&F films and all those stunts and all that fame and power, I think it went to his head. The car they were driving was a suped up Porsche and they were flying along on a domestic road – which is the very premise of his film franchise. Show business can FUCK U UP.

Beware of this version of method acting, because there is another interpretation of the term, which I will talk about with my next blog. Part of being a professional actor (and you get taught this when you train for 3 years!!) is knowing when to pull back and protect yourself. Knowing when to say no to a stunt, knowing when to not push your body too hard, knowing when to not fall in love with your co-star – they all have the danger of damaging your performance, your career and your physical health.

The mind needs rest and if you are living the role then you are not letting go of the character. The mind doesn’t know when to turn off because it thinks – and with good reason- it has to act all the time. Method acting causing insomnia, mental illness and possible death. Find a way to switch off when they wrap for the day or the show is over.