Sometimes you go to see a show and you sit there and you look at your partner and you want to leave. You apologise, with your eyes, for dragging them there on your date night. Sometimes you sit there and you see nervous performers and you feel embarassed for them. You see boring choices and you see work in progress and you don’t want to carry on supporting them. You feel that what you really ought to do is get up and leave. But you don’t want to. You don’t want to offend. So you wait till interval and pretend to go to your car to get a drink coupon for a mid-show glass of wine- but really, you don’t come back.

The walk-out. We’ve all done it or I should say, we’ve all wanted to do it. Theatre is such an intimate thing that if it is not working you should have the option to stop the experience. But if we did walk-out – what we need is a fallback option. We can’t go straight to dinner, we haven’t seen any bloody thing yet. What the hell are we going to talk about? We have been looking forward to seeing a play all week at work. What we need is….Some show to go see instead. A show that we know will entertain and we know will give us our fix of live performance.

MR KOLPERT at ATYP is that show.

This show should just float around in the cosmos waiting for us…or better yet. It should be an App on our phones that we can just click-on after walking out on some cringe-city disappointment and magically appear at the door; with ticket in hand ready to find a seat. The FallBack option. The show we want to go and see, even though we have seen it before, because we know that it will be the.. Guarranteed Good Time.

This show has anarchy. This show has a definite post-modern morality. This show has full frontal nudity, of both sexes. But the safest thing to say, is that this show is Hilarious. You begin by walking in and seeing an actor monitor two electric puppies rotating & gyrating on the floor and immediately you are disarmed and charmed. Then he leaves. Then a peculiar couple come on and live house until their guests for the evening arrive. This is no drawing – room comedy. This is Black Comedy. Pitch at times.

BUT it is also farce. In fact you could call it Black Farce. Because instead of naked bods running around, popping in and out and bed hopping, this has dead bodies hopping in and out of trunks. If you have ever seen Hitchcock’s Rope (1948) then you will understand the excitement of having a body in the trunk. The sheer fear within us that maybe we could commit murder is the dalliance that this creates and this leads to the only flaw in this show that I could detect – but I will come back to that at the end.

The first thing of note is Bastian (Garth Holcombe): an architect with anger management issues. He is hilarious as this stuckup fuckup who holds our attention with dryness dotted with explosive outbursts. His ever smiling partner Edith (Paige Gardiner) – who is a comedic force just quietly – follows him until she gets kicked somewhere special and then she unleashes the monster within and almost becomes the protagonist in the second half. But this is an ensemble piece and this couple’s OTT behaviour is only possible because of the lovely couple Ralf & Sarah (Tim Reuben & Claire Lovering) that invited them around for pizza in the first place. The irony is that they appear and behave more normal, yet they are the ones who are meant to have murdered Mr Kolpert from accounts.

Unfortunately the best seat in the house is taken by a post. A big bloody post sits in pole position and god I wish I had settee hooked on to it about half way up. That may be the confines of Atyp Studio 1. But the overall atmosphere is great. This is helped by a lighting & music show that rocks the house. Intermittent fuel injection that become moments of dance + mood that show the characters embracing the darkness (or truth) within. The dynamics of this show are outstanding for “fringe” offering. The sound designer and composer deserve a nod, as does the direction (Jimmy Dalton) which never fails to entertain.

But this is the only prob bob. These performers probably need to be told that they have no lack of the FUNNY. The talent is there. The gags are not the problem. Then only way to improve on this to have a sense of drama. I would love to see this show played dead straight. Not played for laughs but if they put their souls on the line and genuinely lived each event as if it was a drama. If they did this – this show would be so funny it would hurt. It would injure you. It would exhaust you with pleasure. Because the jokes, the chaos, the comic timing the dynamics are all there. But if it was played like it was really happening – meaning the drama more important than the laughs – then it would be the hottest ticket in town. The reason we have all seen Rope (1948) and the reason this play was written, was because of the drama of actually killing someone, sticking them in a trunk and inviting people round for dinner. That daring morbidity is there in this show but not enough. We need to contemplate this for real. What this show is doing is putting in enough drama just to make us laugh. But to really make us fly, they need to play it straight.

The show is still so entertaining that I would like to see it again and again (and I just might!). The disclaimer on the door said this show had vulgarities and nudities. This makes you enter with excitement and anticipation and this show delivers on that. We see Mr Kolpert finally and we all expect him to be the full frontal nude. And we have that playing on minds the whole show. Where is he, how is he and is he naked & dead? But instead it’s other people and the complete exposure of 3 attractive people, is totally in place with the bedlam of the whole show. Just another dynamic. Just another wowser, of this goto Sure Thing. 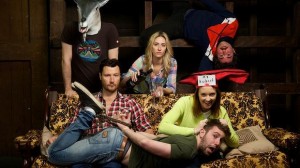