Does acting make you mad?

Want to be great?

Want to be told your work is first class?

You need technique. But does your approach put you in danger of going MAD.. 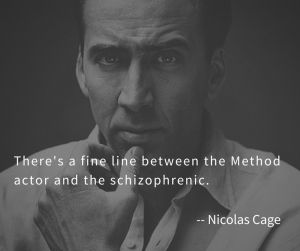 Here are two I have tried:

Emotion Memory which comes from Lee Strasberg/ Actor’s Studio/ Stanislavsky – is the acting technique where you use memories from the past to play a scene. This might be the one event from your childhood that you tap into again and again. For more on this click here.

Meisner Technique is the acting technique that comes from Sanford Meisner where he, amongst many other things, tells you to use imagination as the cornerstone of your craft to play out a scene.

If the scene calls for tears, what do you do? You have to do something.

So which is going to be? Your Past or Your Imagination? What are you going to use? Many big stars have talked about not being able to let the role go when they go home. They do amazing work but at what cost? Re-living the most painful memory of your childhood….does that not make it still an issue in your life? after the show has finished or after the film is shot? I am not sure as Emotion Memory didn’t really work for me. I just came across a block when I tried to dig into my childhood. And at other times I tried reliving experiences that had happened recently as they were parrallel to what was happening in the script, but it didn’t work as that experience had been dealt with. You need to coerce emotion. You need to find a way that works for you. And I believe everyone is different.

Meisner is healthier than emotion memory. But the playground is still treacherous. I remember playing a scene where my wife gets killed in front of me by a Nazi and I was imagining my own beloved getting killed in front of me again and again, take after take…and at one point i felt i was going to lose it and my brain would start bleeding.

So I pulled back and told the director that I was done emotionally and I needed a break. And when we started up again, i just indicated. But he had already gotten a closeup, so all was good. And yes I was able to drop it and go have a beer with the boys after shooting. However on another shoot I tried to stay in character for the entire shoot and when I had a scene where I was meant to have been awake all night so I didn’t sleep the night before at all – did it for real. This is the closest I came to madness because when the shoot was over and I got back home I had insomnia for about 5/6 days. And the film was only a 5 day short film. Imagine if I did this for a feature film? I think thats why Heath Ledger died. An actor has to look after himself to go the distance: emotionally, physically, spiritually and mentally. And you have to be in charge of this. No-one will do that for you. Not your director, not your agent, not your first AD, not your manager and not your spouse.

You must stand guard at the door of your well-being.

2 thoughts on “Does acting make you mad?”